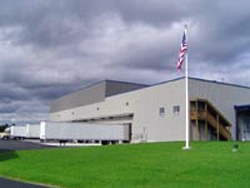 Update/Revise
NRF Distributors was born out of the entrepreneurial spirit, which is genetically encoded in the Pomerleau family. Like most everyonefs early family history, (before the industrial revolution) the Pomerleau family was involved in farming, for as far back as can be traced, to 1650.
Diversification from farming came with the arrival of the paper mills. In Livermore Falls, from 1880 to the 1930fs, the great grandparents of NRFfs founder, Norman Pomerleau, supplemented the income from two farms with a brickyard and working as teamsters for hire, hauling freight around Livermore. This was the beginning of our business philosophy, that survives today, of gkeeping several irons in the fireh. Diversification to weather economic storms by having a variety of gpipelinesh generating income for the family.

Normanfs grandfather was an astute Wall Street investor who made a small fortune in the market and diversified into residential real estate while working in the paper mills.
All the stock money was lost in 1929, but the residential real estate, and the paper mill job, eventually survived the crash. Frank Pomerleau (the gFh in NRF) was old enough in 1929, to have lost in the market crash. Young Frank was able to salvage $700 from a bank account just before the bank shut down in the great depression. This cash was invested in a machine to make ice cream and a small van type truck. Frank kept his family fed during the depression by selling ice cream at all the county fairs in Maine. Frank then invested his profits in residential real estate. The paper mills started up and Frank went back to work in the mills while his wife Lillian helped him start and operate a neighborhood grocery business on State Street hill in Augusta. It was the first grocery business in Augusta to offer self service. Before the Pomerleau grocery store opened, Augusta residents would arrive at a grocery store with a list, and a clerk would fill the order from the back shelves. The grocery store income was supplemented with homemade ice cream and Augustafs first fast food.. .the very popular gItalian Sandwichesh. Frank was an innovator. In the rationing years of World War II, he kept his customers supplied with beef, by raising his own cattle, and kept customers supplied in beer, with truckloads direct from the giant Boston Breweries.
Frank had also diversified (while in the grocery business and working in the local paper mill) into selling commercial freezers to other grocery store owners. With success in selling freezers commercially, Frank decided in 1950, that he wanted to sell appliances and televisions to the general public. (In 1950 television was just arriving in Maine with Channel 5 in Bangor) So Frank sold the grocery business in 1950, and got permission from the paper mill superintendent, to get a couple of years of gleave of absenceh, to give himself time to devote his full efforts to building an appliance and television business.
The new home furnishings business was built on land Frank owned, across from the grocery business, at the corner of Laurel and State Streets. The business was an immediate hit in the boom post war economy. Frank never had to go back to the mill.
Norm came into the business fresh back from Bentley College and serving time for the Army in Korea. The store kept growing and diversifying...furniture and carpeting were soon added to the product lines. In 1960 the business outgrew the original buildings and was moved to much larger quarters at the comer of Bridge and State Streets.
By the early 1970fs Roger Pomerleau finished up at the University of Maine and joined Norman in the furnishings business. By this time, Pomerleaufs had grown by leaps and bounds to become Mainefs largest home furnishings business. Norman liked the carpet business the best, and had grown this division to the point which was starting to develop into a significant wholesale business from our large inventory.
The entrepreneur genes kicked in again, and in the early 70fs, Norman got the endorsement and a small investment of inventory from the family to start NRF Distributors. NRF began on a shoe string budget in a warehouse that Frank had been using for furniture storage on Powhatten Street in Augusta.
In the late 80fs and 90fs the costs of operating Mainefs largest home furnishings store was exceeding the ability of central Maine to support it. So like most retail in the country it was time to move on. Roger anticipated the trend and helped establish the Marketplace at Augusta, while with regret, having to close down the old retail business.
Some of the basic principles that have fired the success of Pomerleau businesses over generations are...
¨ Keep up with the times by creating business from the current economy
¨ Dedication to the success of the businesses
¨ Constantly reinvest in growth and development
¨ Work hard but do not neglect the family
¨ Give back to the community