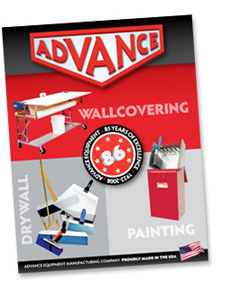 It was 1922. In Chicago, August Wedekind, a carpenter and contractor was talking to a friend who said that he thought that wallpaper was the coming thing, and that August should start manufacturing tools for that market. Taking his friends advice, August began manufacturing paste tables, trestles, and paste boards in his garage, and started selling them to local area hardware stores.

As the business grew, August found that he needed more space and built a 5,000 square foot building, on the West side of Chicago, which today, is still the current location of Advance Equipment Manufacturing Company. The larger space meant additional machinery with which to create more tools. Products were expanded to include items such as straight edges, seam rollers, casing knives and wallpaper trimmers.

Augusts son, Bill, joined the company in the early 1940s and invented the drywall taping knife, the first of its kind. The product line grew again to include not only more wallcovering tools, but tools for painters and decorators.

The business and Bills family grew proportionally. He and his wife, Mildred had four sons and a daughter. The boys (John and Paul) became involved with the company and learned the business. After Bills death, John, his oldest son, took the helm and now his children (John R. and DeAnne), have become the fourth generation of Wedekinds to run
the company.

The 2004 acquisition of Ramco Tools, added additional pasting machines, and various hand tools to fill out the product line.

The Advance Equipment line of high quality American-made tools has been recognized by the industry, and is well regarded by professional contractors. Advance Equipments offerings to the trades have grown larger, facilities and manufacturing technology have expanded, and new innovative products are being developed. Today, Advance Equipment Manufacturing company sells to a market which includes not only the United States, but Canada, Mexico, and a growing overseas market.